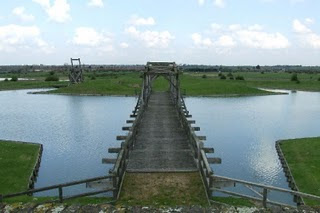 Banquette - a firing step behind the parapet
Battery - a series of gun emplacements
Bastion - an earthwork projecting from the main fortification
Barracks - housing for soldiers
Breech Loading Gun - a gun loaded from the rear (breech)
Caponnier / Caponniere - a structure projecting into (or passage flanking) a ditch, allowing fire
Carnot Wall - a wall with loopholes
Casemate - a bomb-proof vault in a fortification, usually a gun room or barrack room
Citadel - the last point of retreat in a fortification
Countermines - underground tunnels dug from the counterscarp to prevent enemy mining
Counterscarp - the outer wall of a ditch
Covered Way - a passage protected by a parapet, usually on the counterscarp of a fort
Ditch - a defensive trench around a fort, also known as a 'line', often called a 'moat' if filled with water.
Encente - an area enclosed by fortified lines
Embrasure - See 'Loophole'
Escarp or 'Scarp' - the inner wall of a fort
Expense Magazine - magazine located close to the gun, used when the gun is in use
Gallery - an underground passage in a fort
Glacis - the area in fron of the counterscarp
Haxo Casemate - casemate on the terreplein housing a gun
Loophole - a gap in the wall of a fort allowing gun fire
Lighting passage - area around a magazine allowing lights to be placed in recesses behind glass
Magazine - the place where ammunition, or gun powder is stored
Merlon - raised earth banking on a parapet between gun positions
Muzzle Loading Gun - gun loaded from the front
Parapet - a wall on edge of a fort's rampart, built for protection
Postern - a passage leading from a fort into the ditch
Rampart - the top of a fortification, often where the guns are located
Redan - an angluar earthwork projecting into a ditch
Redoubt - a self-contained fortress
Sally Port - a passage, often including a staircase, providing quick access out of a fort
Shifting Lobby - area where soldiers changed clothes before entering the magazine
Side-Arms - items used during the firing of a gun, often stored nearby on the rampart
Terreplein - part of the rampart of a fort where the guns are located 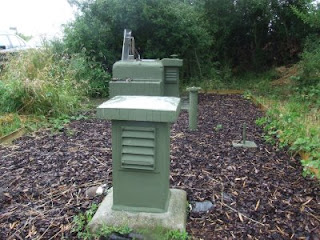 Adit - Horizontal mine entrance
Dene Hole - A small chalk mine style, dating back the Medieval times accessed by a shaft
Drift - Vertical / inclined entrance to a mine or tunnel
Opencast Mining - Mining from the surface rather than underground
Stope - Removed area of rock in a mine taking the form of a large step
Posted by Colin G at 4:22 pm