These large tunnels are of unknown origin, but seem to have been used in the past as store rooms. They take the form of two large parallel vaulted rooms with an interconnecting passageway with a number of small alcoves. At the end of the second chamber a short passage leads to a pit and shaft, which seems to have been built to carry a pipe up to the site of the Grand Shaft Barracks above.
Note: revisit made 15/2/2010, with permission of the new owners. Very little has changed inside the tunnels and they remain empty and unused. Further research into the tunnels has led to their identification as 'Scott's Caves'. This is due to them being behind the former Messrs. Scott & Son's Dying and Dry Cleaners premises, who used the tunnels as stores and workshops. One tunnel was previously used by the Admiralty and the other as an Air Raid Shelter during WW2.

These caves are on private land, many thanks to the owners for allowing access.
Plan of the tunnels 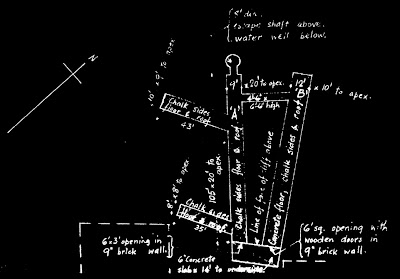 Looking into Cave 'B' Interconnecting passage to Cave 'A' Looking towards cliff fall at entrance of Cave 'A' Looking towards the rear of Cave 'A' Passage to well shaft at rear of Cave 'A' Inside the passage shown above Looking down the well Looking up the shaft Tunnel spurring off from Cave 'A' that was a funny trip there. LOL

how do u get to that part of the dungens

I was trapped in Scotts cave, when a bomb hit the cliffe face above the entrance. after a while a gang of men one of which was my father,cleared enough of the chalk to enable us to escape.

Remember my father worked for Scotts Dyers and Cleaners when we moved to Dover in February 1959.
Went to the factory with him a few times, the caves were in much better condition back then, although I was not allowed to explore.

I heard about this things already. Thanks for sharing! cantrellzwetsch.com

This is so impressive, Thanks for sharing! Scott Keever SEO Washington DC

Your work is totally valued nonstop and the world. It is a useful as well as unfathomably broad blog. Keep up with the incomparable; I look at a few messages on this site, including I consider that your blog webpage is captivating as well as has sets of amazing thing of data. Much obliged for your gainful drives. | Cheap skip hire Swansea