Shivering Sands Army Forts are a set of Maunsell Sea Forts similar to Red Sands. They were built on land in taken out to sea to be constructed in 1943. Anti-Aircraft guns were originally mounted on the top and accomodation rooms located below. As with the Red Sands Forts, they were decomissioned in the 1950s, but saw new life during the 1960s as the base of pirate radio stations. Unfortunately, the searchlight tower has already been removed, its place now marked by a buoy, and the future of the other towers in uncertain.


Boat tours are available to the forts via Bayblast or the X-Pilot boat, unfortunately no ladders remain, so boarding the forts is no longer possible.
View of all the towers 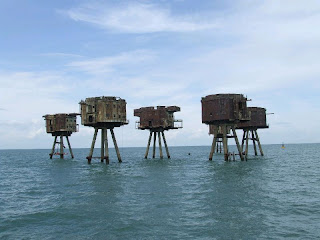 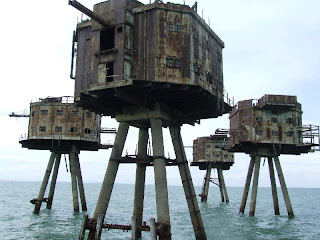 Looking at the bases of the towers 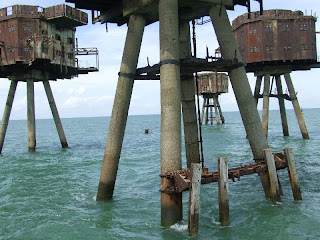 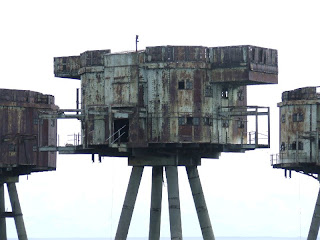 Close-up of the centre tower 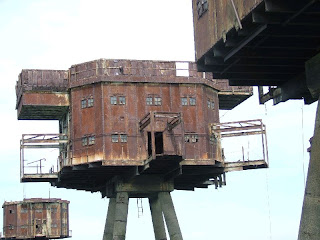 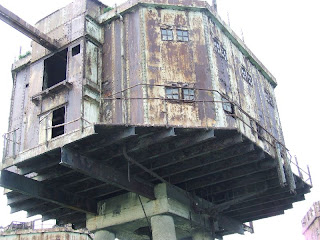 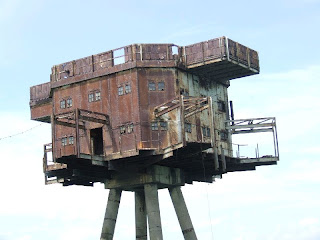 Some of the other towers 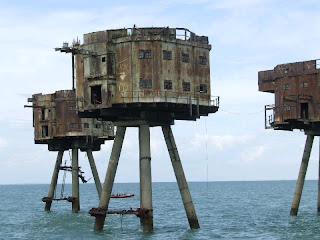 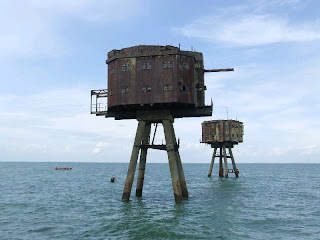 A final view of the towers 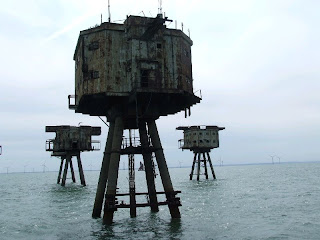 It has been mentioned that the Searchlight Tower has been removed. Although one of the seven original towers is missing, with just a stump evident, it was actually a gun tower and was not removed as such. Rather it was knocked over into the water as the result of a collison by a vessel in thick fog in 1963.

Excuse me, isn't there a movie about this place?
I mean, I watched it a long time ago and I dont remember the name, but I'm pretty sure it was the same towers.

Reply to my blog plase.

The film is "Not so jolly roger" a Dangerman film
http://www.google.co.uk/url?sa=t&rct=j&q=not%20so%20jolly%20roger&source=web&cd=3&cad=rja&ved=0CD4QtwIwAg&url=http%3A%2F%2Fwww.youtube.com%2Fwatch%3Fv%3DRbMs6wAGnYU&ei=oUIBUZGVI6Wx0AWhg4DQDA&usg=AFQjCNFyIXAl7qzvvaMYuQpOdeZ6C2rjBQ&bvm=bv.41248874,d.d2k

These are so unique towers have heared about so many towers but not about gun tower.they might use them for wars and defending boarders .

Personally for me, these towers look frightening, they would perfectly fit as an installation for the film about the invasion of the aliens.

Does this look good in person?
https://www.reliantpools.com/

Wow! I love the content of your blog. Thanks
wescoopthepoopokc.com/

I love sharing your thoughts here. Keep it up! realsleep.com/

Some part of the world has this Search Light, it is not actually common nowadays but usually use in a large company who need satellite. https://www.concretecontractorsrochestermn.com

Each blood group then has an Rh ( Rh positive or Rh negative ) which implies that it exists in all 8 types of blood groups. https://groupe-sanguine.fr/

The forts were designed by Mr G. A. Maunsell and built for defence during 1941-2. Check us out

This is great information on design. We love design at Car Wrap Houston because it's practically the main thing we do to help our customers. But it's great to see it put to use in other disciplines as well like this.

I really enjoyed seeing the work that was done on a subterranean level here! At Deck construction Greenville SC we're moving dirt all the time to build our structures. But they are nothing like this! This is on another level.

Glad to see this great post. Check us out

Wow this thing is so cool! visit https://treeremovalbrampton.com/

Once in a while, it's good to see content like this. Very educational indeed. I am a part-time carpet cleaner and a student at the same time.

I enjoyed this kind of article, it's very historical :) https://www.inspectionmanaging.com/

This thing is an old one. I hope they restore this because this is something historical.
https://www.lynnlaw.com/

Thanks for sharing this great blog. fishersbasementwaterproofing.com/

It has been referenced that the Searchlight Tower has been eliminated. Albeit one of the seven unique pinnacles is absent, with simply a stump clear, it was really a firearm tower and was not eliminated in that capacity. Maybe it was pushed over into the water as the consequence of a collison by a vessel in thick haze in 1963. | Scaffolding hire Swansea