This redoubt was built in the early 19th Century and forms part of the ring of Martello Towers along the South East coast. An almost identical fort exists at Eastbourne which has been restored and is open to the public. The opposite however, can be said about Dymchurch, which is on an MOD rifle range and is in original condition. Both forts were built as barracks for the Martello system and take the form of a circular ring of casemated rooms, with a parade ground in the middle, surrounded by a dry ditch. The interior of the fort has remained free from graffiti and contains a number of original features. WW2 additions are visible on upper levels, with gun emplacements and observation posts.

The Redoubt is located on Hythe Ranges, many thanks to the MOD for allowing access, and John Vaughan for arranged the visit.
Plan of the Redoubt 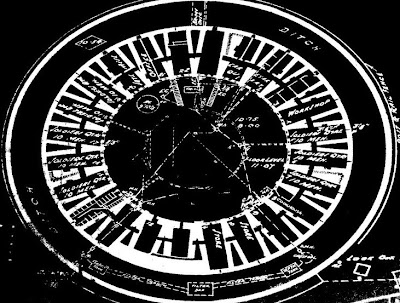 Entrance to the Redoubt Looking down from the upper level to the casemates below Casemates on the lover level Passage inside the fort on the lower level Each of the casemated rooms has the same basic design Back of one of the rooms Metal window frames in another casemate Further along the passage The main magazine, the lighting passage runs behind the far wall Windows in another room Futher along the passage Another view along the inner passage Exterior of one of the casemates Looking through the sally port back into the fort Inside the dry ditch Stunning pics.I have driven past this site for many many years,i had an idea of what it was like but not exact.Have always wanted to go in but its used for army training purposes.So thanks yopu very much for sharing.

Glad you enjoyed the pics, went past the place many times myself before finally getting in. Eastbourne Redoubt might be worth a look, if you're interested, as it's almost the same.

When we at school in the 1970's we managed to climb into teh fort on a couple of occasions. Came out through the main gate I think, left it unlocked no one realised. this was before the army started using it. I must have been as it was left...great fun

Discovered this site by accident. Excellent historic resource. Driven past this particular fort for the past 45 years on the way to the beach. Fantastic pictures and state of preservation....thanks remaining in MOD ownership I guess.

Hi i just wanted to point out that a paranomal group are using your photos as their own.

My mum was born at the Grand Redoubt in Hythe in 1938. She lived there with her parents and brothers and sisters.

The Federal Government's dark hired soldiers were utilized basically as occupation troops as a result of their eagerness, affordable web service to carry out abominations against the Southern populace.

I want to go here! Thanks for sharing | https://realsleep.com/

What a very nice place to visit! Thanks | check it out